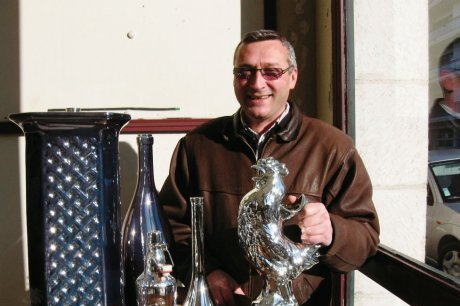 The “périgourdin” garage owner Jean-Marc Pradier launched a process which allows to give a chrome-plated aspect in any object. A national development is in progress.

In his car concession of the street Antoine-Gadaud in Périgueux, Jean-Marc Pradier does not speak more than about that: the new process Speed(Look) Chrome-plates who allows to make brilliant any object. Examples which he realized find themselves in all the garage : a column in plaster gilded, silvery bottles, a glittering cock, a glazed beetle, pipes in PVC become metallic, brands in Plexiglas which shine in the sun … In brief, so many objects as we would consider past in the hands of mythical king Midas.
While looking for an effective and long-lasting system to redo chromium of classic cars Jean-Marc Pradier launched into this adventure. “There was a Canadian process. But the cover did not hold. It was not in the point. “With a colleague and a Parisian friend, Laurent Thierry, he asked to a brilliant chemist to look for a solution easy to operate. And he found.

A certificate is put down, but there is still some secret in thebusiness. ” It is necessary to clean the object, then we apply a coat of catcher which we air in a cabin with painting of body (in 55 degrees). Then we apply the argentic coat and finally a varnish. ” It is necessary near week to lead correctly the operation. “It can be done only by a coachbuilder, because it is necessary to be equipped and to have strong knowledge”, specifies the garage owner.

In the distilled water

The layer from 8 to 10 microns resists the time and the attacks: “I have rooms in test on the roof since May and that always holds.” The process is also guaranteed without heavy metals and without solvents, because the application is made with some distilled water. A company, Look Chrome-plates, was created with an antenna in Paris and one in Périgueux, and operating licenses would soon be given up to other professionals.
“The silvery is trendy, there is a big request “, insures Jean-Marc Pradier. The orders multiply for artists, decorators and of course all which touches the customization of cars, famous car tuning. ” It is obliged that it works. ” Especially as he does not stop improving the system by being able to give it colors and even by returning the phosphorescent surface !

The process is still high-end. ” We use all the same of the pure silver “, he insists. A big part is worth around 600 euros, a trinket around 150. Artists and luxury stores are already customers.

Rather happy of this result, Jean-Marc Pradier joined the departmental competition ” Innovate to win ” of the Chamber of trade. He will know the result today during the prize-giving.